Anna Suggested this podcast, linked below:

EXCERPT 3 IMPOSTER SYNDROME
(there are a few pages missing)

Notes made during the 3rd reading group The Problem With Impostor Syndrome is a chapter from a book called Steal As Much As You Can by Nathalie Olah:

Notes made during the second BABEWORLD3000 reading group, reading the introduction to Taking Up Space: The Black Girl’s Manifesto for Change by Chelsea Kwakye and Ore Ogunbiyi

Photo of notes in sketchbook- will probably replace with a better scan when I have the chance.

Notes made during the talk by artist, curator, teacher, writer and consultant Rosalind David

This talk was really engaging and full of useful information for the future- as you can see I made a lot of notes!

Notes made during Christian Heaths’ lecture:

I tried to ask Heath about implicit bias and the racist roots of anthropology, and if he was aware of/ tackling implicit biases within himself and his research teams and he brushed me off, which was highly disappointing and frankly, annoying. If these scientists and researchers are allowed to study people and their behaviours as they interact with the world around them I feel they should properly tackle implicit biases within themselves regularly to make sure that they do not unfairly stereotype or make false assumptions. What do I mean by implicit bias?
“Implicit bias… comprises those views and opinions that we may not be aware of. They are evaluations that are automatically triggered when we encounter different people or situations, and commonly function without a person’s full awareness or control”
Taken from this site
Having researchers making judgements on people’s behaviours is highly unethical if they aren’t challenging their unconscious views, because their research could be influenced by them and contain unfair biases towards certain people.

However in terms of my project this talk was very interesting- as I want to explore the object (in this case my bones and the casts of them) and how materials and colours affect the viewers perceptions of them. Of course the key problems I face are:

I need to consider both of these further, and it would be a good idea if I can do some practical tests- i.e. smaller pop up exhibitions at uni- I could try and book a small room out to set up my work and invite other courses or staff to come see my work, and find a way to record what happens. This will obviously still have some biases though- people at art school are more likely to act the way I want them to (.i.e interacting with the objects more readily) than people who aren’t at art school, but I still think it could be a good start for my research.

On another note, I think you put together a really well thought out presentation- the material was clearly divided into sections, the links were mostly strong, and the videos helped to break it up and make it easier to engage with. You just need to pull this back into your practical work and keep making! 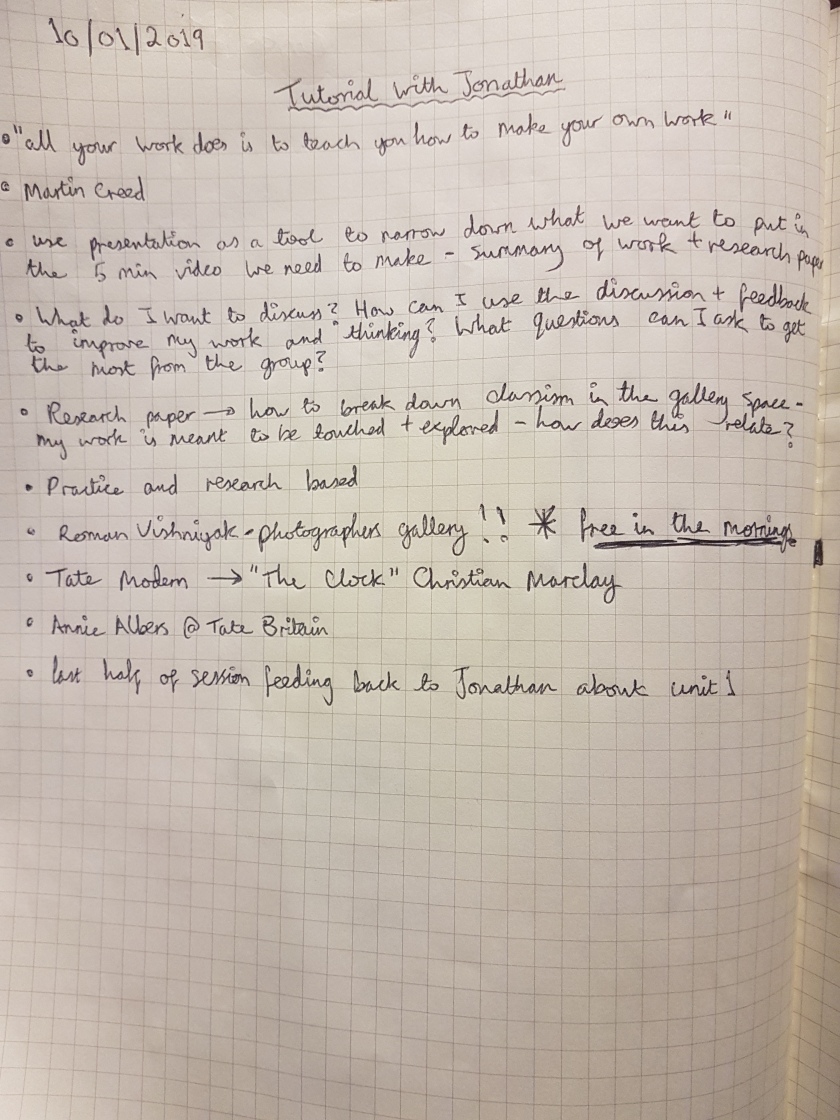